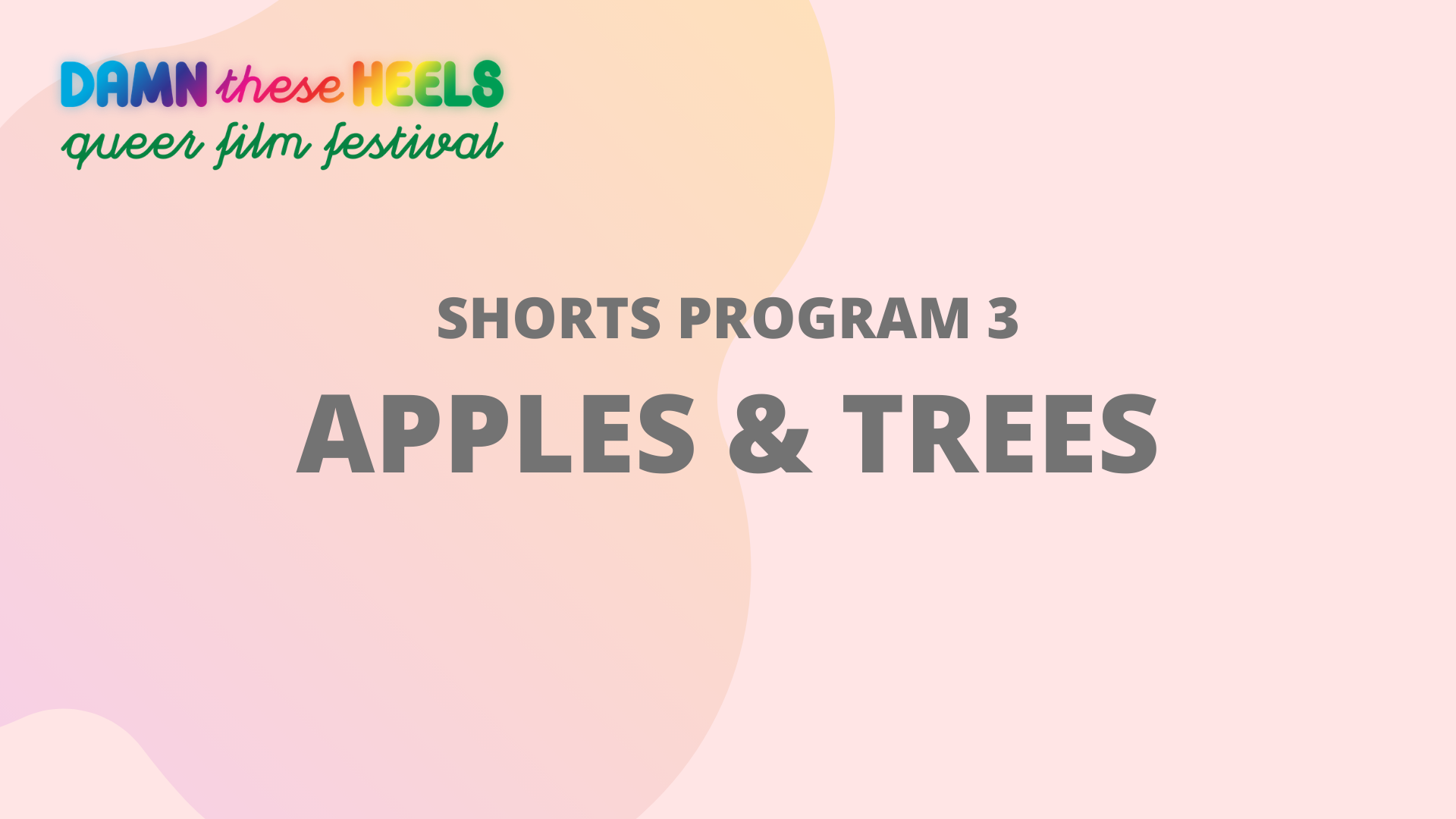 Queer family, chosen and otherwise, constitute the connection between the films that fall in the Apples & Trees program. Parents and their children navigate the complexities of coming out, staying out, and living out in this collection of shorts desiccated to the space between generations.

IN FRANCE MICHELLE IS A MAN’S NAME

Deep in the heart of the American west, Michael returns after years of separation to his parents’ home. As they try to negotiate better understandings of one another, Michael as a trans man and his parents as born and bred rural citizens struggling to accept him, concessions are made.

A smart, concise, playful, and serious exploration of male ritual, family dynamics, and the trans experience, In France Michelle Is A Man’s Name is at once a bridge-building and critically questioning work, quintessential to capturing the contemporary experience of trans men in the United States.

In France Michelle Is A Man’s Name won the Grand Jury Prize at both Outfest LA 2020 and Slamdance 2021 and has screened at numerous other festivals including AFI, Newfest, and many more.

Directed by Van B. Nguyen

Vietnamese Ma (Elyse Dinh) and Ba (Joseph Hieu) prepare a turkey for the following day’s Thanksgiving dinner. Their son, Tuan (Devin Hong) will be in attendance, in part to introduce his new partner to his family. When they are surprised by the introduction, they need to renegotiate their understanding of their son and the holiday ahead. Thanksgiving highlights the capacity for familial love in the face of immense change.

A Vietnamese-American take on the classic coming-out tale, Thanksgiving brings to the forefront a merging of Vietnamese and American cultural traditions. Told primarily from Ma’s point of view, the film is a careful look into the emotions of a family learning to understand one another in an ever-evolving social landscape. In exploring this space, Thanksgiving addresses the complex realities of what it means for not only an individual, but a family and a culture, to break free from heteronormative social expectations. What results from this simple rawness is a beautiful story of acceptance, resilience, and belonging.

Van B. Nguyen’s second short film, Thanksgiving, has been showcased at Asians on Film Festival, Viet Film Fest, and more since its premiere.

HOW TO RAISE A BLACK BOY

Four boys, ages 6-12, take a journey through a fantastical meta world of Black boyhood somewhere between the worlds of Peter Pan’s Neverland and Golding’s Lord Of The Flies. The boys summon the “Ujamba,” a Makonde term meaning “The Tree of Life,” along with the demons, angels, and ancestors that come with it. Confronted with shadows of their older selves, they must forge an escape into manhood.

Beautifully weaving an imaginative fairytale, an incisive description of queer Black childhood, an address of contemporary politics, and the shared experience of childhood secrets that haunt our adulthoods, this collage is as cerebral as it is gorgeous.

How To Raise A Black Boy has been presented at Outfest Fusion as well as the Atlanta Film Festival.

Recently estranged after his family learns he is gay, Omar, a young, Arab-Canadian man, struggles to contact his ailing mother. Phone calls–answered and unanswered–between Omar and his family punctuate the film, as he attempts to bypass his sister and father, who block his communication and who blame him as a source of stress and a catalyst for his mother’s worsening health, to reach his mother directly. Filmed largely from a distance over the course of a year, Omar’s isolation is visibly apparent as he moves through the city alone across the four seasons. Dialtones and dialogue hover over Zoromba’s withdrawn documentation of Omar’s daily life and reveal his private, ongoing persistence to connect with his mother. Meanwhile, snippets of Omar’s conversations with friends reveal the pretenses he performs, as he brings up noncommittal plans to travel, dismisses his family’s judgement, and highlights the benefits of his disconnection.

Zoromba’s third short film and debut documentary short, Faraway is an intimate and meditative portrait of estrangement and the shadows that it casts. Quietly and with reserve, it captures the solitude of Omar’s severance.

Eggshells director Salva Doytcheva masterfully focuses the audience’s eye on vibrantly rendered details while piquing interest in what is happening offscreen, all while incorporating wild soundscapes to heighten the action on screen as well as what lies just outside the frame.

In this bittersweet story about a woman’s longing for acceptance from not only her lover’s family but her own distant father, we witness the emotional toll it seems to be taking on her through the fragile materiality of an easter egg’s red shell.

Eggshells is the winner of the Best Short Film award at the Golden Rose Bulgarian Feature Film Festival and also played at 2020 POFF Shorts. It will also be showing at Moving Images – Open Borders.

As frustration mounts in a bitter custody battle between two women, the war ends in an abduction. Shedding light on the privileges of heterosexual co-parents and lending the audience a perspective into the complexities of queer parents navigating the legal systems in Israel, True Mother is the story of motherly love pushed to the brink. Films like this remind us of the nuances and the battles of gay parenthood.

Damn These Heels Film Festival is proud to present the world premiere of True Mother by Rotem Gabay.

In Brazil, tragedy strikes Marilene’s family when her daughter, Roberta, goes missing. Mounting a mountainous effort, Marilene searches for her trans daughter. As a science-fiction allegory unfolds, light is shed on the experience of existing as a trans person of color.

This film explores the profundity, depth, and persistence of the love and acceptance a motherhas for her daughter.