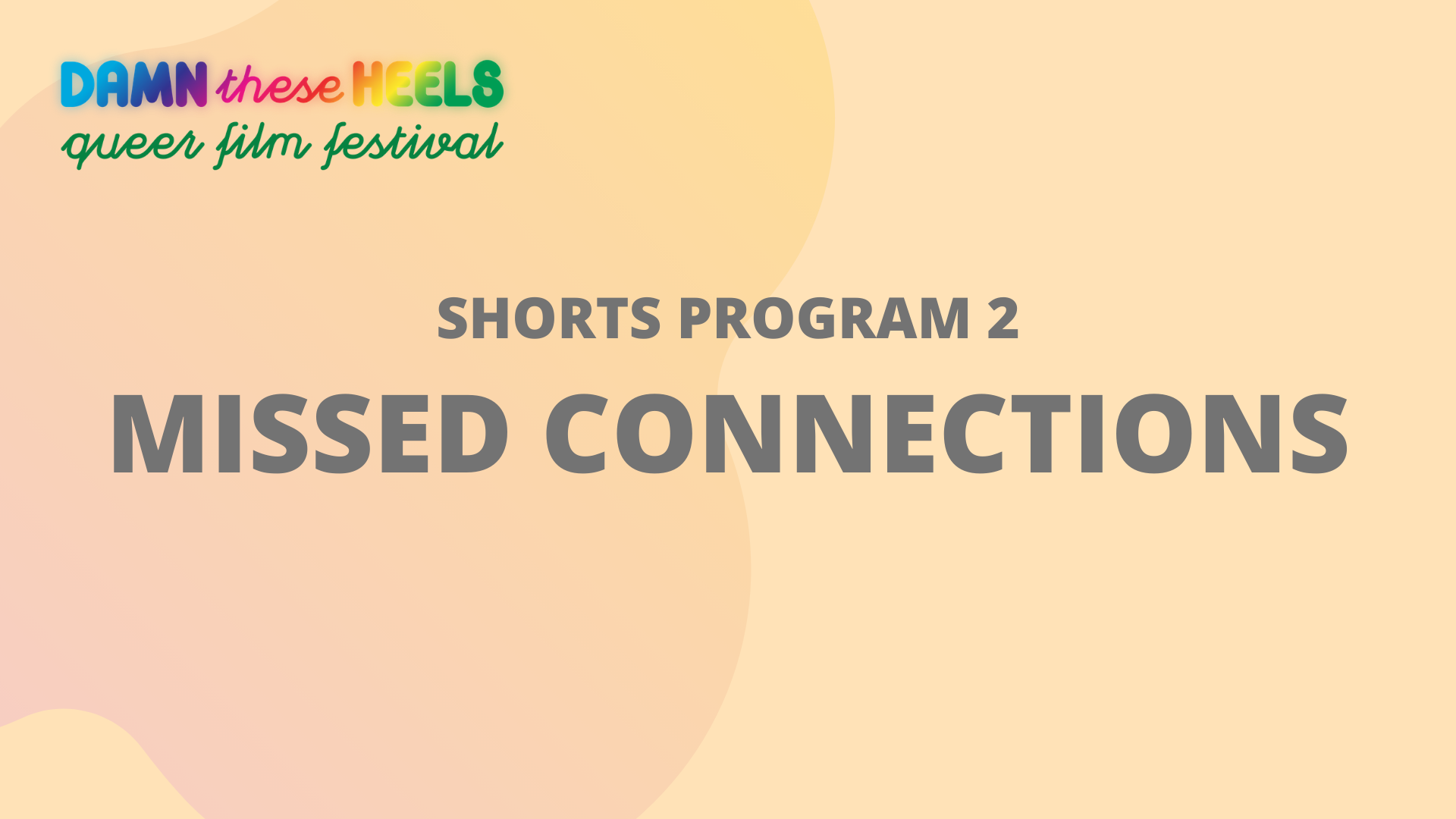 Missed Connections makes a home for stories about rupture, failure, longing, and accident. Heartbreak as well as hope permeates these short films that each exist in the space between people, space that is sometimes bridged and sometimes not, but always present. While the relationships in these stories perhaps miss the mark, triumph finds its way into the program through self discovery, independence, boldness, empathy, music, and kindness.

When her ex-girlfriend, Rosa (Nikoline Husmer Marquardsen), rsvps for an upcoming ‚“queers ONLY” party on Facebook, Frede (Anna Zerbib Streitz) makes up her mind to attend. After some persuasion, her older sister, Nastasja (Levi Eja Roepstorff), agrees to let her tag along, but enveloped by Natasja’s friends, Frede’s discomfort among older, confident queers is palpable. She strains against their teasing and the identities that they impose upon her. When a game of truth or dare ensues, Natasja corners Frede and labels her definitely, albeit semi-permanently. A peace offering is made, but at the party, Frede’s sensitivity heightens in the presence of her ex. Natasja’s ill-received attempts at sisterly advice, encouragement, and meddling escalate, until the two siblings come to a head.

Ottilie’s third short film, Babydyke, at its core, is a poignant portrait of two sisters. Ottilie’s characters are delicately and sensitively wrought to bring to life this rare gem of a queer narrative, that highlights the differences of siblings, even those with shared identities, and the internalized homophobia that arises within us, even—and sometimes, especially—in queer spaces.

A VOICEMAIL TO TRY AND MAKE YOU FEEL BETTER

In this raw and emotional short, audiences get a front row seat to the pain and reconciliation of a young couple. Simple, beautiful, and emotional this short captures the entire arc of a breakup and charts a glorious return to one another.

A quiet, poetic celebration of Black love, A Voicemail To Try And Make You Feel Better uses an engaging audio technique to bring its central love to life onscreen.

A Voicemail To Try And Make You Feel Better debuted through the Visible Poetry Project.

A pianist struggles in her heterosexual relationship. When she and another woman, an old piano student, make music together after a long time apart the film gently, yet scintillatingly alludes to a greater history between them. With tension and passion sung out through stellar piano performances and a gorgeous black and white pallet, Duet is lovely to watch and to listen to. Any music lover will find this film delightful.

Clementine has invited Cynthia to an intimate dinner party after a period of separation and over the course of the evening the unfurling conversation reveals a complex and heartbreaking history between attendees. Its depth of characters and underlying tensions make Cynthia a deeply moving watch, encapsulating a rich and complex set of dynamics all within a brief running time.

This is a stunning short film, superbly acted and directed; Cynthia is a story of unanswered love, mental health issues, and ultimately self-acceptance.

Cynthia has played at The Richard Harris International Film Festival is directed by Jack Hickey and stars Clare Dunne, whose breakout performance in Herself was a hit at the 2020 Sundance Film Festival.

Two old flames reunite on old stomping ground in this arrestingly nostalgic short film about love, longevity, and letting go. Sasha and Rae discuss their history with just enough ambiguity to allow audiences to mix mystery and imagination and their own memories of loves long lost.

With warm performances, emotionally rich texture, and an ending gesture that affirms the belief in human goodness, Talk Soon is as moving as it is specific and original.

Damn These Heels Film Festival is proud to present the North American premiere of Talk Soon by Joey Massa, which premiered at Boden International Film Festival.

WHILE WE STAYED HOME

In the empty city of Tel Aviv during the pandemic two strangers cross paths. Their small flirtation hits the most graceful of pandemic humor notes and ends with a satisfying (for those who are

How will this group handle this situation? Well acted and directed, each character provides an insight into their sexual awareness and level of acceptance. The tensions run high, even and especially as the past relationships of the group members are revealed.

Viewers will walk away with a sense of changed minds, hard-earned lessons, and Frankie’s courage reverberating heartily.

When Frankie, a trans-non-binary individual, attends a men’s church group meeting, they are hoping to find a sense of belonging and acceptance.

OF HEARTS AND CASTLES

Through a chance encounter outside a bar, two men bond over their own sense of loneliness. One reeling from a breakup and another trying to carve out his place in the world, the union of these two wandering souls feels like it has lasting meaning beyond their night together.

This is a heartfelt and gentle film about finding hope in loss; and the potential for a new beginning with, or without, someone you have never met before.

Of Hearts And Castles has played at BFI Flare, Outfest LA, and more. The film won Best Short Film at Seville European Film Festival and was nominated for the same category at TWIST: Seattle Queer Film Festival and ASECAN.

Energized by its youthfulness, but somehow wise beyond its years, this short chronicles the complexities of growing up, growing into oneself, and growing apart. Touching with a deft hand on family, class, and education, Marlon Brando feels like it exists with its audience among friends.